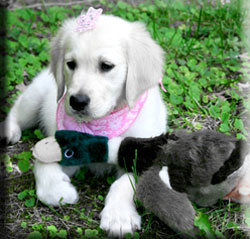 A lot of people ask about the differences between a male and a female English Cream Golden Retriever when it comes to training and behaviors. And this question is a great one. We really have put a lot of thought and time into thinking through that answer. We are unique breeders in that we train ALL of our pups, which gives us a lot more experience than most breeders. Typically breeders let their puppies go home before they really show their personalities. Not only do we keep our pups longer, but we spend hundreds of hours with each individual pup. In fact, you will find a unique personality description of every puppy on their individual sale pages. 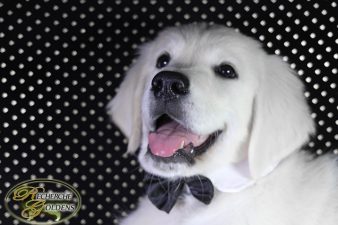 The second myth is that male Goldens have a lot of issues with “marking” or “humping.” This is almost never the case, especially if you are not breeding. If you plan on neutering your boy and have no females in heat with another male nearby, then you will not have to worry about a male Golden marking in your house or even too much in your yard. In fact, the vast majority of our male Goldens will squat to urinate their entire lives. They also are not prone to “humping” legs like some other breeds may be.

So What Are The Differences Between The Male and Female English Golden?

There are a few differences between the genders that are important to point out. These are based on our extensive research, and while there may be other differences, these are the ones that stuck out the most over the years.

The first difference is mental maturity

Females do mature mentally faster than males. A 1 year old female acts like a 1.5-2 year old male. Males have a longer “puppy stage,” which a lot of people love and a lot of people don’t. It’s a matter of preference. Males do mature physically faster than females, especially when it comes to potty training. Because of this, most females are easier to obedience train than males. They normally have their commands down sooner than male English Goldens. A 12 week old female is typically obedience trained as well as a 14 week old boy.

The second difference is physical maturity

The third difference is size

n average male is 75-80 lbs. A small female can be as small as 45 lbs, and the largest females are rarely larger than 70 lbs (not overweight). A small male will be around 60 lbs, and larger males can reach 85 lbs.

Males also typically have a blockier head, thicker coat and especially thicker “mane.” Most show dogs are males because they look a little better and shed their coat about ½ as much as a breeding female. Breeding females blow their coats after a heat and so half of the year they do not look good. If you spay your female, then she should shed as much as a male dog.

Also, just because a male dog has a thicker coat does not mean that they shed more. They shed about the same amount, as long as the girl is spayed. If she’s not spayed, then she will shed almost twice as much as a male after her heat cycle.

Where These Differences Matter

When it comes to being a new English Golden puppy owner, choosing between a male or female is often one of the biggest decisions you will make. We are confident that no matter which one you choose, your experience will be an enjoyable one. However, it’s important to realize the above differences.

As your puppy grows into adulthood, some of these differences will become irrelevant. The training level of a graduating puppy in our Puppy Training Institute may be different in certain areas between the male and female pups, but these differences will even out, particularly if you plan on continuing your pup’s training.

So whether or not the gender matters is up to you. Some buyers simply prefer one over the other. But there is no right or wrong answer, and your puppy will be equally as healthy, and as loving, regardless of what you choose. We do encourage you to choose a puppy with the personality traits you prefer, which are detailed on each puppy’s page, and we will help you in your decision to choose the best English Cream Golden for your family. 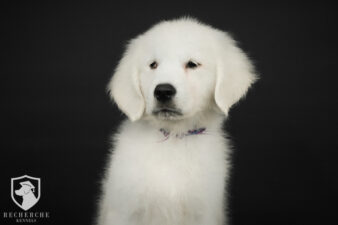 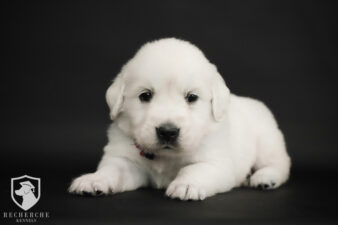 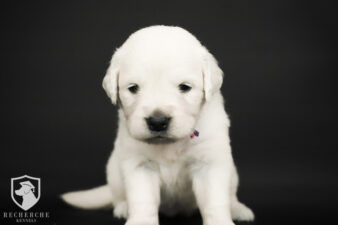 To see all of our girl and boy English Golden puppies, visit our Available Pups page